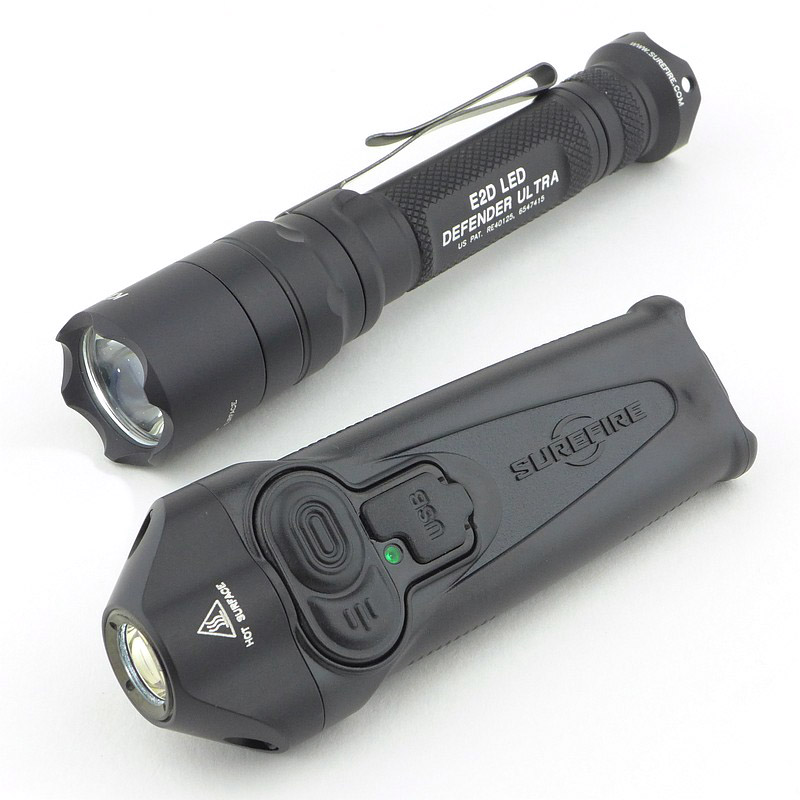 With Surefire, your main expectations might be high quality build and performance, so read on to see if these lights keep up with Surefire’s standards. In this review are two quite different models; the latest update of the classic Defender E2D (in this case the two-mode ‘Ultra’) and the EDC-optimised pocket-friendly USB-chargeable multi-mode, programmable Stiletto.

What are we looking at?:
Though this review is all about the two headline lights, as well as primary cells I’ve been able to test the Surefire rechargeable cells for the Defender. 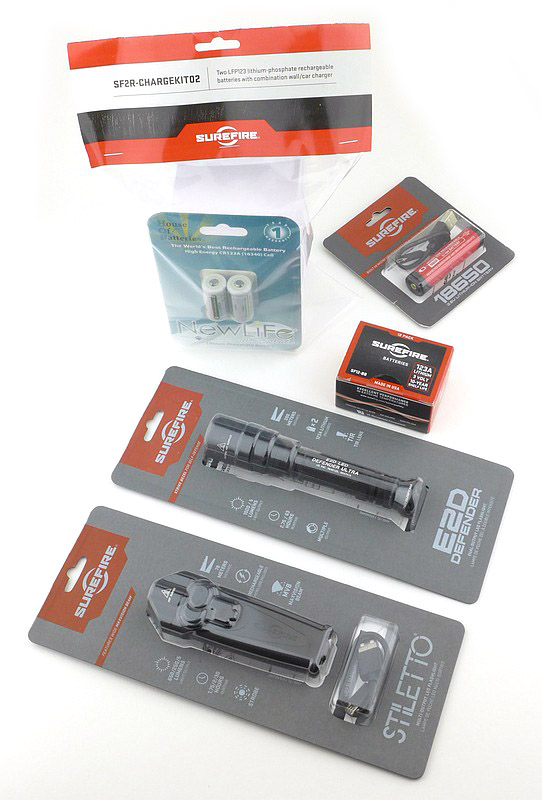 Moving onto the main feature let’s get into the details of these two. 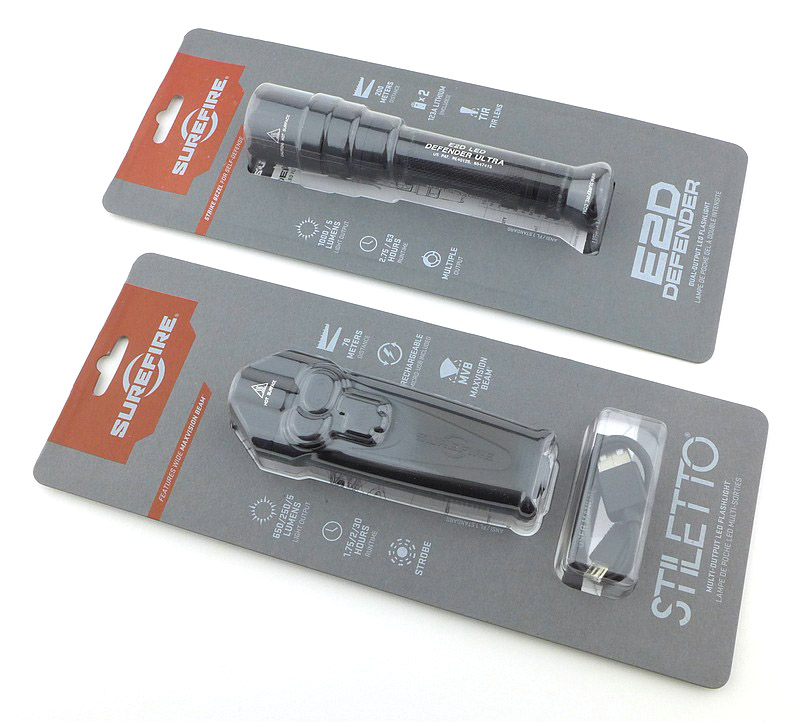 Taking a more detailed look at the Stiletto:
The Stiletto is a new style of light, taking on more of the form of a pocket knife and slipping into your pocket in the same way, and with a clip to hold it in place. To achieve this narrow profile it has a built-in battery and USB charging, allowing the shape to not be compromised by replaceable batteries.

Taking a more detailed look at the Defender E2D Ultra:
The Defender E2D is a classic Surefire model, bit it has moved with the times. Starting life as a incandescent bulb light with lens/reflector, it has grown to use LED and TIR optics. This latest version has raised the output to 1000lm+. It is mainly the head of the light that has changed in appearance compared to the earlier models you might know.

Surefire’s rechargeable CR123 option:
Surefire have been a little behind other manufacturers with regard to taking up rechargeable batteries. In years past, dedicated Surefire owners have had to find their own way, often going to the lengths of getting their battery tubes bored out to take 18650 cells plus a few other methods.
In this case, the cells themselves are not Surefire branded, instead Surefire have chosen K2 Energy’s Lithium Phosphate cells.

Please be careful not to judge tint based on images you see on a computer screen. Unless properly calibrated, the screen itself will change the perceived tint.

The indoor beamshot is intended to give an idea of the beam shape/quality rather than tint. All beamshots are taken using daylight white balance. The woodwork (stairs and skirting) are painted Farrow & Ball “Off-White”, and the walls are a light sandy colour called ‘String’ again by Farrow & Ball. I don’t actually have a ‘white wall’ in the house to use for this, and my wife won’t have one!

The character of each beam is really very different. Starting with the Defender and it’s mix of smooth hot-spot and spill beam giving a very useful all-round capability. The spill beam is surprisingly wide, so much so you can see the bezel crenellation shaping in the outer edge of the beam.

The Stiletto has a Surefire ‘MaxVision beam’; I’ve come across a few variations of this, but in essence they have all been quite wide and evenly lit to give you ease of vision at close to mid ranges. You will notice in the direct comparison that the Defender’s beam is actually wider than the Stiletto’s. This is even more noticeable in the outdoor beam-shots. The Stiletto however lacks the hot-spot and provides nicely even lighting.

Please note, all quoted lumen figures are from a DIY integrating sphere, and according to ANSI standards. Although every effort is made to give as accurate a result as possible, they should be taken as an estimate only. The results can be used to compare outputs in this review and others I have published.

This is a table of measured results. PWM frequencies are recorded by an oscilloscope, and in some cases are clear and in others are more like superimposed noise. It only appeared that the Defender’s High beam when using the RCR123 cells showed any PWM. This is possibly due to power supply pulsing with the different voltage of the RCR123 cells which were able to produce a higher maximum output than on CR123.

In the runtime graphs, first check the start of the run and you can see how the RCR123 cells are capable of keeping that peak output from the Defender until the programmed slope-off of the output after 60s. However skip onto the full runtime and you can see the RCR123 cells run out after thirty minutes, but the CR123s go on a lot longer and with much more warning they are getting low. For ‘duty’ use you will still want to use CR123s, but the RCR123s give great guilt-free lumens.

Performance is solid from the Stiletto and output is more than good enough for EDC; 45 minutes of 500lm-plus output is impressive.

The Defender E2D Ultra and Stiletto in use

Though by no means a lesser light, there is perhaps slightly less to say about the Defender E2D, so I shall start with that. For me the ‘Ultra’ version is absolutely the one to have. The output levels are so opposite with a 9lm Low and a 1000lm+ High, these might seem too at odds to work well, but they do. If I could add one thing to the Defender E2D it would be a way to user program the Low to be the first mode, but without this the High-Low mode order ensures it lives up to its name.

Thanks to the beam shape and hot-spot, the 9lm mode does a great job for those daily needs of a bit of light. It hits the right balance of being low enough for complete darkness but not so low it is useless for anything but pitch black.

I have many 1000lm+ lights and many into the 5000lm+ level, yet the Defender seems to manage to appear brighter than similar output lights. I have never been left wanting by the Defender (running on the RCR123) with its solid performance and beam profile.

The slim body allows easy cigar gripping and general operation is what you expect from a tail-switch light.

And the Stiletto, this is a very different concept and is very different to use. It’s flat profile and large pocket clip make it one of the easiest lights I’ve used to pocket carry. Ergonomics are a really strong point with the Stiletto. In general use you will find the main side-switch falls nicely under your thumb. Side-switches are far superior to tail switches for EDC tasks, and make it more comfortable to hold the light for extended periods with a low arm position.

But of course, the Stiletto also has a tactical tail switch so you have the option of the high tactical grip with direct access to High. This leads me to the set of images in the gallery as I personally found the tail switch (which is quite stiff) gave me a few issues with grip and the Stiletto sliding forward. I had to use two methods to keep it stable; one was to hook my little finger just round the front of the aluminium head, and the other was to ensure I had the Stiletto rotated so I was gripping onto its width and not onto the flats. (check the gallery for examples) It has been fatiguing to use the tail-switch for longer periods, but with the streamlined shaping this is unavoidable.

The Stiletto’s main power switch is one of three areas on the rubber side panel; I am mentioning this to describe something else to be aware of. To the left of the main switch is a programming switch, this has not caused any issues in general use. However, the USB charging port cover is something to be aware of as I have often found myself trying to turn it on by pressing this part as it is quite ‘button-like’. It is very easy to do this, especially if wearing gloves, so just needs a little awareness and grip adjustment to correct.

Having three levels and the ability to swap the order from L-H or H-L is very useful. The most used mode for me was the Low, followed by Medium. High was too powerful for most of my EDC uses, but great to have for quick blasts.

The previous gallery has two in-use photos on a pathway to compare these two lights. In the earlier beam-shot gallery you could see the effect of the even circle of light the Stiletto emits. Once you get outdoors and don’t have light bouncing round to fill in the areas beyond the outer edge of the beam – the tunnel vision effect becomes more pronounced. You can see with both the Defender and Stiletto aimed in the same way, the Defender view is complete where the Stiletto’s beam leaves you blind beyond the narrower circle of the beam. Using the Stiletto in unlit areas required more beam movement and scanning to see where your feet are going.

Review Summary
The views expressed in this summary table are from the point of view of the reviewer’s personal use. I am not a member of the armed forces and cannot comment on its use beyond that covered in the review.

Something that might be a ‘pro’ for one user can be a ‘con’ for another, so the comments are categorised based on my requirements. You should consider all points and if they could be beneficial to you.